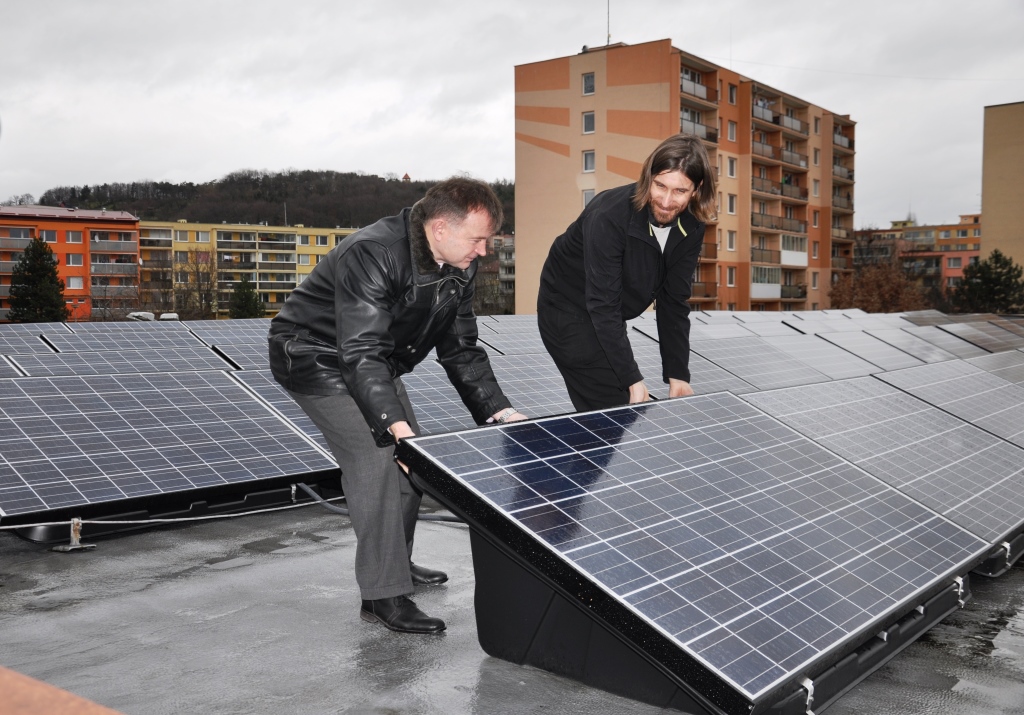 One of the least developed regions in the Czech Republic, the Ústecký district emerged from the Second World War with a rapidly expanding opencast mining industry and loss of citizens due to the resettlement of the native German population. These processes resulted in a legacy of air pollution and poor living conditions affecting the region.

But hazy clouds and abandoned, turn of the century villas are not the only symbols typical for this region. Ústecký is also known for its thermal springs and is often referred to as ‘the garden of the Czech Republic’.

In the middle of this garden lies the city Litoměřice, which was relatively fortunate to never have experienced the affects of being endangered on mining, so unlike other cities in the region, it has retained a positive image, with its historical city centre and relatively high living standards.

Several years ago, the Litoměřice city council decided to tackle its dependence on fossil fuels and become a leader in energy efficiency for the whole country.

In 2011, the city employed Jaroslav Klusák to manage its energy programmes and in 2016 added Michal Černý. Klusák’s first move was to understand the technical design and energy consumption of every one of the city´s building stock. Klusák then developed the ‘Energy Plan 2030’, which tasks Litoměřice with saving 20 per cent of its energy compared to 2012 levels.

Litoměřice owns 150 buildings, for which Klusák and Černý – so-called ‘energy managers’ – devised two types of projects for saving energy. The first is to improve energy performance with proper insulation and other effective measures to reach passive or even active energy standards. Other type of project consists of installing renewable resources.

In 2013 and 2014, Litoměřice renovated a number of buildings, including two elementary schools and one kindergarten. Educational facilities were insulated and photovoltaic panels were installed on the roofs. The city also improved the energy efficiency of its ice hockey stadium by installing heat-recovery ventilation and using the heat produced by water filters in a local swimming pool.

But Klusák and Černý knew that just as important as the implementation of these measures would be monitoring energy consumption and instructing end users how to get the most from the buildings. Through this, the energy managers are able to achieve higher energy efficiency every year. In 2016, the net profit was over CZK 1 million, and about a decade – once the investment has been paid off – the two expect profits to increase six fold.

To employ a dedicated position of energy manager was proving to be a very profitable decision.

The city also devised a smart solution for how to reinvest its profits. As motivation to the team of energy managers, five per cent of the savings are returned to them as a bonus. A reward is then given also to users of the renovated buildings: 30 per cent of the profits are returned to the organisations that use the buildings, and the energy managers stress the opportunity for further savings if principles for efficiency outlined by the team of energy managers are followed. Another 30 percent then goes into the city’s Saving Fund, which is used for future investments. The rest (35 per cent) is then allocated to the city budget, so all town residents can benefit from it.

Klusák invented this sustainable system to drive energy savings. Thanks to the reinvesting of profits in the Saving fund, it is possible to imagine that the goal of energy self-sufficiency will be achieved.

Litoměřice also receives funding from different sources, including EU funds that were crucial for the most basic activity –  insulating school buildings. Without such funding, the city could not afford to realize its visions. It still has a couple more projects in the pipeline, which will need more EU funds for their realisations.

One area in which EU funds have enabled Litomeřice’s drive to energy self-sufficiency is geothermal energy. While photovoltaic panels power schools, other buildings in the city are dependent on burning lignite in the local thermal power plant, which receives the coal from the nearby mines. But Litoměřice also wants to tap into another region-specific resource and become the first town in the Czech Republic to source heating from the geothermal sources it has plenty of.

The project was envisioned already in 2003, but a number of technical and financial obstacles have prevented its realisation. But as the project is not an issue from one election to the next, the dream is still alive, and state and EU funding will be available for a unique research centre to develop geothermal energy.

Litoměřice has also announced an idea to use biomass for covering its energy consumption. Its Saving fund will also help realize other energy efficient projects such as the renovation of former barracks for new, social housing.

Its participation in number of initiatives like the covenant of mayors, energy cities and the climate alliance have helped Litomeřice spread examples of simple but smart solutions to kick-start energy transformation. The city now aims to fulfil its 2030 energy goals, but it is well ahead of schedule, so the focus is now on becoming energy self-sufficient. It will be exciting to watch what Litoměřice will do next to become an even better place to live.