All too often, open-pit mining reduces the quality of life for locals because of the pollution it creates, and then afterwards, the location is not restored to its former beauty. Because most mining is done by large companies, who after depleting resources in an area move to a new location, little concern is given to what happens to the quarry in the future. It is also not uncommon for a company that operates a mine to go bankrupt in order to avoid any responsibility for a mine’s impacts.

In contrast, Raul Nämi, a farmer from southern Estonia, started a mine on his farmland in order to improve the life of his family and the quality of the land through landscape architecture. Raul’s daughter, Piia Nämi, now a mother of two, lives beside the former quarry and was kind enough to shed light on the mining.

The land was mostly used as pastures, but the soil was not very rich and growing crops was not very successful, as only rocks surfaced in plowing.

In 2001 Raul Nämi, started to dig soil samples around the farm and discovered that the soil is mostly gravel, so from 2002 he begun mining, which lasted till 2016.

The rehabilitated quarry is now a water body of roughly 300 metres by 250 metres and up to four metres deep. It has two larger peninsulas and one small island. The essential idea was to create a lake where it would be possible to grow fish in the future and a place, where his children would like to live. For this purpose shallow areas were dug, where fish can lay eggs.

On the north side is a sandy public beach that is now a popular swimming spot for people living nearby.

The old farmhouse is located in the larger peninsula and is mostly surrounded by water, with a narrow road leading to the old farm house.

A floating sauna was built and receives its power from wind and solar, which is sufficient to provide LED lighting and propulsion.

In 2016 a 15kW photovoltaic panel array was installed to power local family’s needs in the summer. 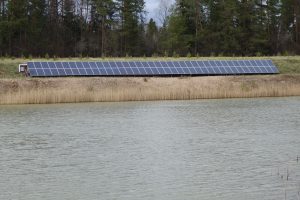 Solar panel installation in Estonia is popular, as the government pays approximately EUR 50 per MWh for renewable electricity produced for the grid. In Estonia over one thousand households have invested in solar production. Still the bureaucracy one needs to clear in order to build solar installations takes time, and the Nämi case is no exception, as for three months the family produced electricity for the grid with no return.
The Nämi story is an example how people can find new ways to transform their lives and how responsible changes to the environment can initiate positive outcomes. The nature in the mining area is already recovering, and the investments from the mining profits in turn provide additional income and reduce carbon footprint.

This story also shows how empowering and involving citizens is fundamental in order to organise a successful transition from past practices towards the sustainable management of the environment, energy resources and territories. Locals are usually the best positioned to redevelop and invest in forward-looking projects, and the EU needs to put in place an enabling legal framework, to support these types of prosumers and local investments in energy efficiency and renewables for these of projects to happen on a larger scale.

Current discussions about the EU budget after 2020 should take into consideration stories like this one, to acknowledge the need for more transparency and public participation in developing energy and environment projects.

While Raul Nämi passed away in 2016, shortly after installing the solar grid, his children will benefit from his accomplishments for years to come.